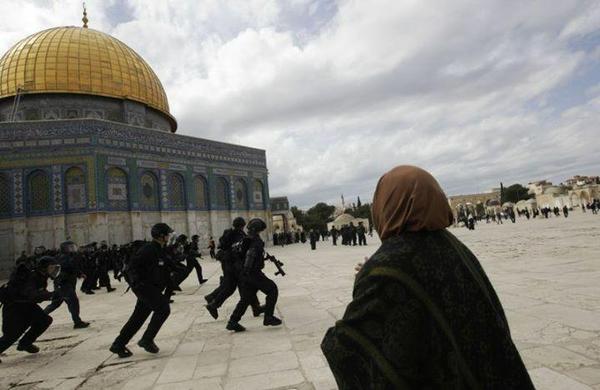 Atlanta In Solidarity with Palestine

This event was originally created by Jewish Voice for Peace-Atlanta Chapter.

Solidarity with Palestine: An Interfaith Prayer & Rally for Peace and Justice in the Holy Land

Atlanta joins cities around the world rallying in solidarity with Palestinians who are peacefully protesting and praying for a free Al Aqsa Mosque, a free Jerusalem, and a free Palestine.

Over the past two weeks, Israeli Occupation Forces have prevented worshippers from freely attending prayer at Al Aqsa Mosque by imposing tight security on worshipers in the Old City of Jerusalem as part of Prime Minister Netanyahu's plan to gradually exert greater control over holy sites.

In addition to these rising tensions in Jerusalem, the people of Gaza continue to suffer a brutal blockade, receiving an average of only 3 hours of electricity per day. Gaza should have electricity, clean drinking water, functioning hospitals, and opportunities to rebuild. This means that the Israeli government must end its brutal blockade, and the world must pressure them to do just that. We also demand an end to American complicity in the illegal military occupation of Palestine.

Please join us this Friday at 5 pm at the Israeli Consulate (1100 Spring St.) with signs of solidarity, candles for our interfaith vigil, and chants in support of peace for Jews, Christians, Muslims and all others in the Holy Land. Stand for peace, resistance, and justice. Stand against the occupation, state violence, repression, and discrimination.

This event is sponsored by:

Local sponsors plan to share words of solidarity and public prayer to mirror our Muslim, Christian and Jewish sisters and brothers doing the same in front of Al Aqsa and around the world this Friday.